If you’re even vaguely interested in the National Football League and its participants, you will certainly know the name of the Dallas Cowboys.  Home for them is the AT&T Stadium.

The Cowboys, although famously playing at the Texas Stadium for many years, have called this place home since 2009 and it is a huge, imposing venue which once held 105,000 people for a football game.

The AT&T, known initially as the Cowboys Stadium, has a retractable roof and is situated in Arlington, Texas, around 19 miles west of Dallas.

Aesthetically this is a very pleasing venue. Domed, glass-fronted and silver, it is rather space-age for a stadium built more than a decade ago and is quite some place to see and visit.

History of the AT&T Stadium

The Dallas Cowboys previously played their football at the Texas Stadium, plying their trade there for fully 38 seasons right up to 2008.

After the Cowboys moved on, it was ultimately demolished in April 2010 by way of a controlled implosion, but the seeds of what is now the AT&T Stadium were sewn way before that, back in 1994.

In those days, Cowboys team owner Jerry Jones had already stated that he wanted to expand the Texas Stadium and add a retractable roof, or indeed move out altogether and build a brand-new venue for the Cowboys.

Talks were ongoing between 1997 and 2000 between the Cowboys’ hierarchy and officials in Arlington, seen as the perfect place for a stadium. Finally, a deal was struck and it was the beginning of the end for the Texas Stadium, though it was still to take a long time to finalise what is now the AT&T.

With contracts handed out in the intermediate years to architects and construction companies, work began in the summer of 2007 on the retractable roof. At the same time, the exterior façade and enclosure work got underway and by the autumn the first steel arch for the venue was erected.

Team owner Jerry Jones announced the stadium’s name as the Cowboys Stadium (though it was clear that naming rights would eventually be sold off) and by 2009 the new venue was open and ready to host major events.

The AT&T Stadium stands alone in a rather arid and bare part of the world, as so many modern stadiums unfortunately do, but some fascinating stats and facts are associated with it.

Big Events at the AT&T

Super Bowl XLV was hosted at the AT&T Stadium in February 2011, while the College Football Playoff National Championship was a big draw in 2015. The Cotton Bowl Classic has been played here on numerous occasions.

There has been a growing thirst for soccer in Texas and the AT&T has got in on the act. International matches have been played here, while Chelsea also faced Club America in the World Football Challenge back in 2010 in front of more than 57,000 people.

The big draw money-wise is often music gigs, which tend to gross anywhere between $3 million and $15 million. Already the AT&T Stadium has hosted the following:

Bet on All Games at the AT&T Stadium with Roger.com

You can wager on all games played at the AT&T Stadium via Roger.com. Bet with one of our recommended online bookmakers only to get the best possible odds and service. 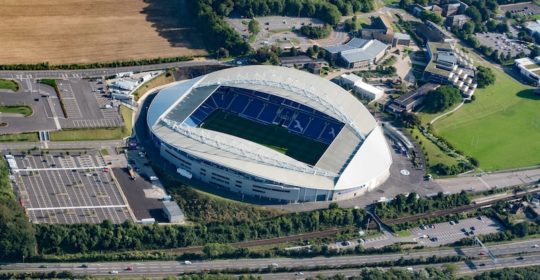 Brighton and Hove Albion’s home stadium is colloquially known as ‘The Amex’, however, it has/had various titles since it was built. Owing to a long-term sponsorship deal, the full title of the venue is the American Express Community Stadium and should that be revoked, it would be known as the Falmer Stadium. The original name…