After a bumper sporting summer that saw football oh so nearly come home and Team GB claim dozens of medals at the Tokyo Olympics, the new English footballing season kicked off on August 6th with West Bromwich Albion taking on Bournemouth.

Watched by millions across the world, the eagle-eyed among you may have noticed something a little different about West Brom’s kit. That’s because Intouch Games can proudly say they are the new back of shirt sponsor for Championship football club West Bromwich Albion. The sponsorship will run for the entirety of the 2021/22 season.

The Intouch Games logo will feature on the West Brom home shirt, while its most popular brand, mFortune online casino, will adorn the back of the away and third choice shirt.

It’s not often that professional football clubs are sponsored by a local company, which makes this partnership between the two Black Country-based businesses even more special.

The online casino company has come a long way from the early days of supplying physical gambling machines back in 2001. It now offers players hundreds of online slots, dozens of online bingo rooms to play in, not to mention the incredible no deposit bonuses and Free Spins offers that are handed out.

Over the years Intouch Games has become a market leader in the gambling industry, thanks to an innovative mix of offering players original and unique online slots, unbeatable casino bonuses and dedicated Customer Support Team.

It is now the largest independently-owned online casino in the UK and has picked up a host of prestigious awards. Such as: Best Mobile Casino Operator, Best Mobile Bingo Product, Best Customer Service, Best New Slots Site among many others.

With high-flying aspirations that match their own, West Brom are hoping to achieve promotion back to the Premier League. As one of the favourites to get promoted, expect to see the Intouch Games and mFortune name televised regularly throughout the season.

Simon King, Albion's Chief Commercial Officer, is delighted that the club and Intouch Games have reached an agreement for the coming season.

Intouch Games have had a remarkable success story in such a short space of time, and we’re delighted that we can work closely with such a successful Black Country-based business. They are a big employer in the region and we can’t wait to work closely with the Intouch team to develop our relationship.

To discover more about Intouch Games, visit the website at www.intouchgames.co.uk 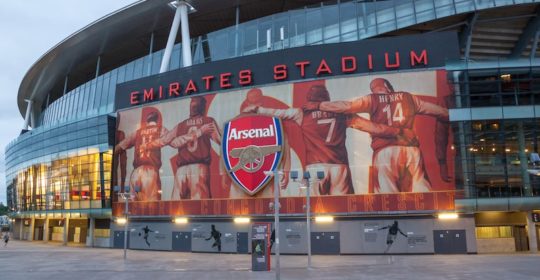 Situated in Holloway, north London, right around the corner from where old ground Highbury once stood, the Emirates has been home to Arsenal Football Club since it opened in 2006. One of the biggest stadiums in the country the Emirates has shown itself capable of generating great atmospheres, especially on European nights, however as the…