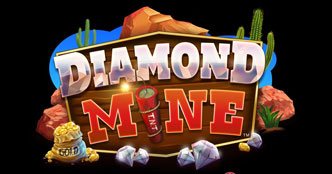 The new Diamond Mine slot, available at Frank Casino and others, has a Wild West theme, and is a high-variance game based on the concept of a diamond hunt, complete with free spins, cascading reels after each win and unlimited multipliers if you keep winning in the bonus round.

There are massive potential payouts, and it’s powered by the renowned Big Time Gaming Megaways™ game engine. If you enjoyed Bonanza, you’ll love this one – there’s even the same slightly loopy banjo music! Get digging for diamonds today, on a PC or your mobile device.

Diamond Mine is a six-reel slot whose reels can display up to seven symbols each, and, as they do, create tens of thousands of ways to win, assuming the reels are set up correctly. Diamond Mine suits low-stakes players as well as high rollers – play from as little as 20p a spin, for or up to £100 a time.

Set in a Wild West diamond mine, the background is one of cacti and red rocks. (At least one reviewer has commented, however, that the cartoon-style graphics aren’t quite as appealing as those of some other slots.)

The higher-value symbols include the pickaxes and spades – equally, look out for the diamond symbol, a lamp and a jolly-looking miner bearing a gold nugget. The diamond will pay 50x stake for six in a row on neighbouring reels, while the dynamite stick is the Wild, which substitutes all others apart from the scatter.

Reels 1 and 6 are able to hold seven symbols, while the other reels can contain up to six symbols.

As with the other games from Megaways™, the cascading reels feature is used to drive more wins. After a winning spin, every symbol in the relevant line is replaced by new symbols which drop down from the reels above. This carries on for as long as new winning lines are being created.

The sacks of gold are the scatter symbol in Diamond Mine. Four of these are needed off a single spin to kick-start the lucrative bonus round. At first, you get a dozen spins, followed by an extra five for every scatter.

This round also has a multiplier, which goes up by one for each cascading win received. This number can go up an infinite number of times, meaning wins can get very big indeed when you are in the throes of a cascading run.

What’s more, you can bag more free spins in the bonus round if you land scatters on the four individual reels sitting on top of the main reel set. There are five extra free spins for every three scatters, or 10 for every four scatters.

These are the barrels of TNT, so look out for them as they drop down, changing themselves into new symbols to form winning lines.

The bottom line on Diamond Mine

In conclusion, some reviewers have mentioned the high number of ‘dry spins’ during which there are no wins, so you may want to keep an eye on your stakes. But, all in all, you should love Diamond Mine, which breathes new life into the mining slot genre, not least because of its thrilling cascading reels feature.

Where can I play Diamond Mine online?

Diamond Mine can be played at the following online Operators: Play Frank, MrQ, Virgin Games

Who developed the game Diamond Mine?

Diamond Mine has been developed by the software provider Blueprint Gaming

What type of game is Diamond Mine?

Diamond Mine is categorised as Slots

What devices can I play Diamond Mine on?

Diamond Mine can be played on iOS, Android, Desktop, Mobile