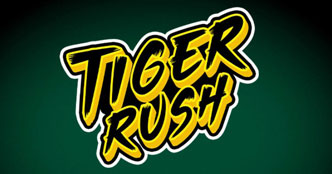 Tiger Rush is the eye-catching new slot from Swedish software developer Thunderkick, and it’s available at a few exclusive casinos. It’s based on the mighty Asian tiger, takes a tropical rainforest as its backdrop, and there are five reels, three rows and 10 fixed Paylines in the base game. Tiger Rush is available across all devices, mobile and otherwise, including Android and iOS gadgets. Play from just 10p per spin, or for as much as £100. Look out for the tiger Wild symbol, and enjoy the bonus game, which you can kick off with five or 10 free spins. These see the Paylines expand up to 25, with the chance to win up to 20 free spins.

Thunderkick is well known for producing quality, high-end content with a unique twist, and Tiger Rush is no exception. It’s aimed at all kinds of players, from those who just want a small flutter and a bit of fun, to high rollers.

Some reviewers have described Tiger Rush’s graphics as a little basic. Nonetheless, you should still find plenty here to enjoy. Visuals include a forest backdrop to the reels, which are shown encased in a vine-like green frame.

There’s an Asian jungle theme, while the animal vibe of the tiger is in line with the themes of other recent Thunderkick launches, including Falcon Huntress and Jaguar Temple.

With Tiger Rush, you can win up to 375 times your stake with just one spin. Play in demo and AutoPlay modes or, of course, for real money.

Appropriately enough, the tiger symbol is the Wild, appearing only on reels two to four. However, no matter where it lands it will cover all of that reel. At the same time, it will also award a single free spin, with that Wild reel frozen in place. The tiger Wild replaces all others to help create winning combos except for the game’s scatter symbol.

The Tiger Rush Scatter symbol is only displayed on reels one and five. Landing a couple of these scatters, or one with a neighbouring Wild, triggers the free spins round, and it’s here where you’ll find the biggest wins are up for grabs.

Each individual triggering combination can land five spins, meaning luckier players will find there are 20 on offer in all.

During the free spins round, the Tiger Wild is active and you can form wins both from left to right and right to left.

The Return to Player (RTP) is pretty healthy at 96.32%, or just over Thunderkick’s standard of 96.1%, and it’s also slightly higher than average for a slots game.

Where can I play Tiger Rush online?

Who developed the game Tiger Rush?

Tiger Rush has been developed by the software provider Thunderkick

What type of game is Tiger Rush?

Tiger Rush is categorised as Slots

What devices can I play Tiger Rush on?

Tiger Rush can be played on iOS, Android, Desktop, Mobile

Loving the calming affects of Tiger Rush...
by Robert
"A great slot to hang and chill out at :)"