Ludlow Racecourse sits in Shropshire. It’s close to some other fine racing territories. For that reason, it gets support from places such as Hereford and Worcester. In addition, it is only 40 miles from Birmingham, too, meaning those from more densely-populated areas often visit the course.

This National Hunt only venue stages meetings right throughout the jumps season. That is, from October through to the middle of May.

This course has some pretty unique features. Firstly, the entire centre of the track is a golf course, similar to Newcastle in that sense. Also, the B4365 road crosses through the track at three different points! The road is closed off when race meetings are taking place of course.

Ludlow is trusted by some of the best trainers in the game. You only need to take a look at their unofficial hall of fame. The likes of Ryanair Chase winner Taranis, Victor Chandler Chase scorer Tamarinbleu, and 2009 Champion Hurdle hero Punjabi have all won here in the past.

In the last five years or so, some huge names have won at Ludlow. These names include jockeys Richard Johnson, Harry Skelton, Paddy Brennan, David Bass, and Nico de Boinville. They all have a higher than 20% strike-rate at Ludlow here.

The top trainer list at Ludlow Racecourse also reads like a who’s who of National Hunt racing. For instance, the big five include Nicky Henderson, Dan Skelton, Philip Hobbs, Evan Williams, and Henry Daly. Between them, they have saddled well over 100 winners at this venue in that time.

There is free admittance at Ludlow for all accompanied under-18s, a real feather in the cap of this fine track. For a typical race meeting for those paying, Grandstand and Paddock admission will cost £15 when bought in advance with an online Member’s Day Badge costing only £20. These prices remain the same even for Ladies Day and other such higher-profile events.

Only National Hunt racing needs to be accommodated here, the tracks being a mile and a half in total length. Although the hurdle course is actually just a few yards longer than the chase track and has slightly easier bends given that it runs to the outside of the chase course.

The circuit is right-handed, features a sharp bend approaching the long home straight for the chasers, and is basically flat on the steeplechase course and slightly undulating on the hurdles track.

There are six hurdles per circuit, three of them being on the run-in, while over on the chase course there are nine obstacles. The four fences down the back include three plain ones and an open ditch, while the run-in features the same along with a water jump placed just after the winning post.

While those undulations on the wider, sweeping hurdles course which runs around the outside of the chase track are evident, they rarely pose problems and especially not for those horses who are long-striding types as they breeze through the ridges easily.

As for the opinion of those jockeys to have ridden around Ludlow numerous times, they say that to win there you’ll need a horse with plenty of speed. The speed factor matters to the extent that those who have proven to simply be unable to stay the distance elsewhere have found things much more to their liking at Ludlow.

The fences at Ludlow are particularly easy. The better jumpers treat them almost as hurdles. For chase races, Ludlow repositioned a previously troublesome obstacle early in the home straight. Therefore, there are very few fallers around this course these days.

There are precious few demons than for punters to have to think about when it comes to the layout of this track, so simply trust the best trainers who indeed do send some good runners to Ludlow to have done the homework for you and expect them to get the job done.

There are no individual races here that, in terms of their overall quality at least, set the pulses racing. That said, some of Ludlow’s meetings are incredibly popular including these four fixtures:

Now you know a little more about the Ludlow track, you can place your bets with extra confidence. Wager now with any of Roger.com’s highly recommended online bookmakers. 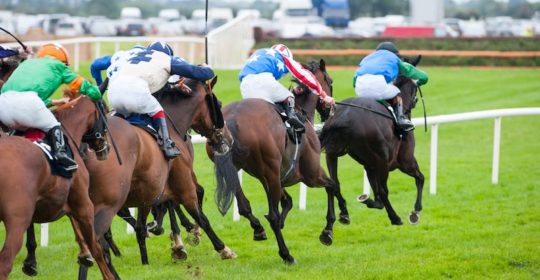