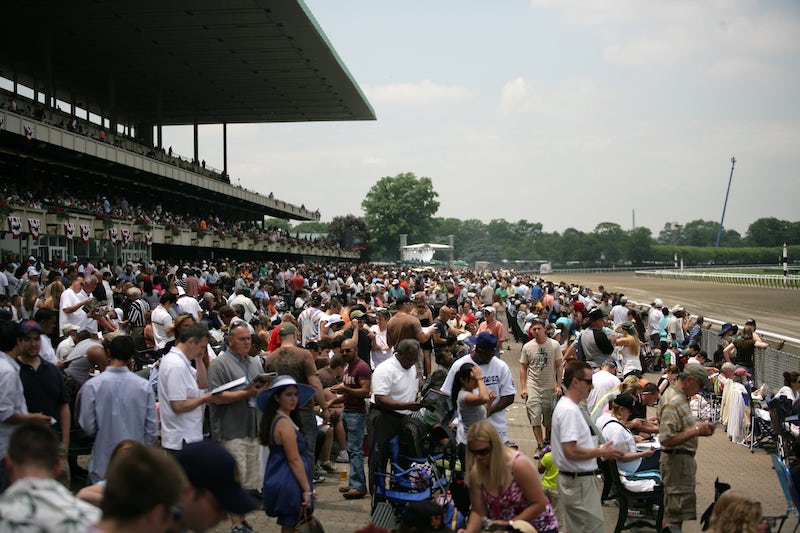 Belmont Stakes day in New York each June is a veritable Grade I buffet and one of the top-level events to be staged at the Elmont venue is the Ogden Phipps Stakes, a $700,000 race for the older fillies and mares.

Run on the dirt track over a mile and half-a-furlong, the Ogden Phipps has been around since 1961 and is named for the owner and breeder of the same name and was given this title in 2003 after his death, having previously been run as the Hempstead Handicap.

While officially on the schedule since the ’60s, other than a title change the event has also been run over 1¼ miles and even over six furlongs while it was also hosted at nearby Aqueduct for a couple of years in the ’70s.

Recent winners have been particularly strong, with 2017-19 scorers Songbird, Abel Tasman and Midnight Bisou all ridden by Mike Smith.

Bet on Ogden Phipps Stakes at Belmont Park 2022 at One of the Following Sports Betting Sites:

New customers only. Min deposit requirement. Free Bets are paid as Bet Credits and are available for use upon settlement of bets to value of qualifying deposit. Min odds, bet and payment method exclusions apply. Returns exclude Bet Credits stake. Time limits and T&Cs apply. Bet on the Ogden Phipps Stakes at Belmont Park 2021 at bet365.

New customers only. Min Deposit: £10. First deposit matched up to £10. 1 x wagering at odds of 1.75+ to unlock Free Bet. Debit Card & PayPal deposits only. This offer is valid for 7 days from your new account being registered. Terms apply. Bet on the Ogden Phipps Stakes at Belmont Park 2021 at Betway Sports.

18+ begambleaware.org. New customers only. Min deposit £10. Money back as bonus if first racing bet loses. Wagering requirements: all sportsbook 3x at min. odds of 1.40 (2/5), casino 35x. Unless forfeited the racing bonus must be wagered before using the casino bonus. Bonus expires 7 days after opt-in. Full T&C's apply. #AD Bet on the Ogden Phipps Stakes at Belmont Park 2021 at Unibet.

8 games, 8 results, £1 Free Bet for each correct pick. Register and predict the win-draw-win result in the 8 selected matches. Predict all 8 results and to £8k (shared if multiple winners). Less than 8 correct: receive a £1 Free Bet for every correct pick. After 2 plays, weekly wagering of £25 (min odds 1/2) required to receive free bets. Bet on the Ogden Phipps Stakes at Belmont Park 2021 at 888 Sport.