How to bet on the Ruffian Stakes at Aqueduct 2023 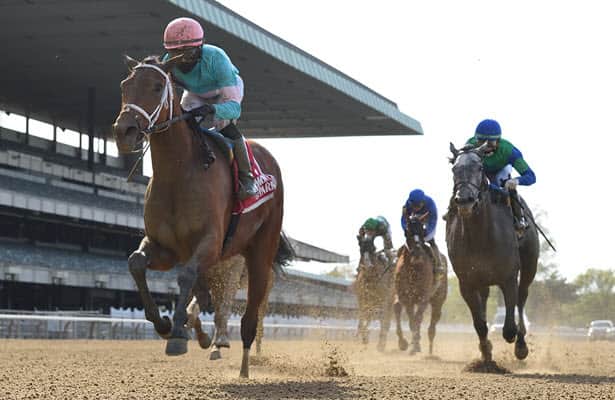 While the Kentucky Derby is taking centre stage in early May over at Churchill Downs, Aqueduct Racecourse hosts the Grade II Ruffian Stakes in New York for the older fillies and mares.

Staged at Grade II level and worth around $250,000, the Ruffian is one of the newer Graded races on the New York Racing Association circuit having been inaugurated in 1976. In its time it has been staged across the state at Saratoga and Belmont as well as here and is named after Hall of Fame filly Ruffian, winner of ten consecutive races in the ’70s.

Staged at first and again since 2014 as a weight-for-age race, the Ruffian has been run as a handicap in the past as well as an invitational handicap. Previous winners include top fillies Lady’s Secret, Sharp Cat, Swift Temper and Fiftyshadesofhay among others.

Bet on Ruffian Stakes at Aqueduct 2023 at One of the Following Sports Betting Sites:

New UK 18+ customers. Use promo code BETFRED60. Deposit and bet £10 on spots within 7 days of reg. 1st bet must be on sports. Get £20 in free bets (FB) for sport, £10 in FB for lottery and 50 free spins (20p per spin) credited within 48 hours of bet settlement. Further £20 in FB credited 5 days after settlement. Bonuses have 7-day expiry. Payment restrictions apply. SMS verification and/or Proof of I.D and address req. Full T&Cs apply. Bet on the Ruffian Stakes at Aqueduct 2023 at Betfred.

New 18+ UK customers only. Min deposit requirement. Free bets are paid as bet credits and are available for use upon settlement of bets to value of qualifying deposit. Min odds, bet and payment method exclusions apply. Returns exclude Bet Credits stake. Time limits and T&Cs apply. Bet on the Ruffian Stakes at Aqueduct 2023 at bet365.