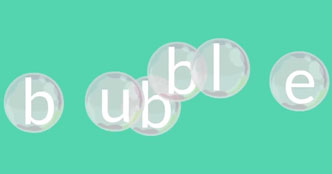 Popping bubble wrap is incredibly satisfying – and academic studies have even shown that it can make you feel less stressed, calmer and more alert. So making this activity a virtual one as part of a fun, friendly online game seems a no-brainer.

Bubble by Tombola Arcade is not an especially arduous game, nor does it involve any particular skills, but players love it anyway.

With this simple and addictive slot, you get a set of bubbles to pop, and you can enjoy the pleasure of popping, and hearing that uniquely satisfying sound that goes with it, while also having the chance to win a big prize into the bargain.

Bubble Tombola Arcade is unique to Tombola Arcade, which develops its own games and software in-house, you won’t get to play it anywhere else.

As your bubbles pop on the screen, coloured marbles appear and float off to join their relevant sections, which are strips at the side of the screen. Each one of these sections is numbered with how much you could win if collect the correct number of coloured marbles – i.e. enough of them to fill the strip.

For instance, if you have four magenta marbles, you win back a £1 stake. Gather nine red marbles and you bag the top prize, of between £25 and £500 – it will vary depending on your initial stake. Other sums in the strip are two quid, a tenner, £20 or £100. The higher the sum, the more balls in the strip.

Tickets start at 5p and go up to no more than a pound – spend 10p, 20p or 50p if you wish – so it’s ideal for anyone who wants to put a limit on their wagering.

And with this game available on mobile, you can pop as you go, wherever you are! Don’t forget to enjoy some banter with your fellow players, or join in the conversation on social media. (Customer support is also always available via live chat and over the phone.)

While there’s an auto-play option, we reckon it’s far more fun playing Bubble by Tombola Arcade manually. Where’s the pleasure if you can’t pop the bubbles yourself?

When you have a pop at Bubble, rest assured that you’re playing a high-quality game, but, also, that it’s been independently assessed by an auditor and rigorously tested before being released to customers.

It’s also been approved by the UK’s Gambling Commission, and results are created with an industry-standard Random Number Generator.

Return to Player or RTP is used to describe the percentage of all the wagered money a game like Bubble will pay back to its players over time. In the case of Bubble Tombola Arcade, this figure is reckoned to be very high at 98.5%. (However, one reviewer did report not winning despite several attempts.)

The Bubble game was advertised on national TV in the autumn of 2016. It’s grown and grown in popularity since then. Once you’ve had a few goes of it yourself, you’ll see why!

Where can I play Bubble Tombola Arcade online?

Bubble Tombola Arcade has been developed by the software provider Tombola

What type of game is Bubble Tombola Arcade?

What devices can I play Bubble Tombola Arcade on?