The Miami Dolphins was founded in 1965 and have been playing in the NFL since 1970.

The team play their home games at the Hard Rock Stadium and have won two Super Bowl titles, both of them shortly after joining the NFL. In recent years, the team has not managed to make much headway, having only made it to the playoffs once since 2008.

History of the Miami Dolphins

The Miami Dolphins became a part of the American Football League in 1965, five years before the AFL merged with the NFL. For the first decade that the Miami Dolphins were in the NFL, they were one of the most dominant teams under head coach Don Shula.

In the 1972 season, they became the first team to go undefeated in the regular season, going on to win the Super Bowl and reclaiming the title the following season.

They had decent success during the 1980s and 1990s. In the early-1980s the Dolphins reached two Super Bowls but lost both of them. Hall of Fame quarterback Dan Marino was leading the side in these games and is often argued to be one of the best players never to have been involved in a Super Bowl win.

For many years, Marino held numerous passing records in the league, helping the team to five division titles and ten playoff appearances before he retired at the end of the 1999 season.

The Miami Dolphins fell back during the 2000s, with the New England Patriots coming to the fore under Tom Brady and Bill Belichick. Legendary Alabama head coach Nick Saban was in charge of the Dolphins for a while, but he did not make much headway. The team has struggled to nail down a solid quarterback ever since.

In 2008, the Miami Dolphins achieved a strange feat when they became the first team to manage to win their division and make it to the playoffs after coming off a league-worst season of 1-15 the previous year.

The Miami Dolphins have a strong rivalry with each of their three opponents in the AFC East, as well as with other teams. Some of their biggest rivals in the division include the Buffalo Bills, New England Patriots and the New York Jets. Fellow Florida team, the Tampa Bay Buccaneers have also been rivals ever since the early days, especially because for a long time they were the only two teams from Florida in the NFL.

Miami Dolphins Stadium and Fan Base

For many years, the Miami Dolphins played their home fixtures at the Orange Bowl in Miami. Following the 1986 season, the team moved to a new stadium, now called the Hard Rock Stadium. It has been known under various names over the years due to different sponsorship deals.

The stadium is situated in a Miami suburb called Miami Gardens and the NCAA Miami Hurricanes also play there. Over $400 million spent on a major renovation to the arena in 2015.

The logo and uniforms for the Miami Dolphins have been pretty consistent over the years. Some of the most notable mascots for the team include T.D., Dolfan Denny and Flipper.

Numerous Miami Dolphins players have been inducted into the Pro Football Hall of Fame for their contributions to the game, including Dan Marino, Jason Taylor, Larry Little, Jim Langer, Larry Csonka and Paul Warfield. Long-time head coach Don Shula (1970-95) was also inducted into the Hall of Fame.

Some of the notable players to pull on the Miami Dolphins uniform in recent years include the likes of Cameron Wake, Jarvis Landry, Mike Pouncey and Jake Long.

The Miami Dolphins have the luxury of playing in a great place like Miami, which is the hub for sunshine and partying in the region. While the team has struggled over the past decade or two, there are some green shoots beginning to appear with an exciting young quarterback on the scene.

If you are looking to place bets on Miami Dolphins games, you have plenty of different markets to check out. These will give you all sorts of great options no matter what team they are facing.

To see the best American football betting sites that are around, head on over to the expert reviews on Roger.com. The sign-up process takes just a few minutes, so you will be betting on the Dolphins in no time. 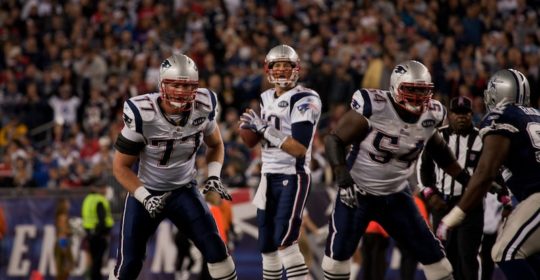 The New England Patriots, one of the most successful NFL teams of all-time, are based in the Greater Boston area. The team plays its home fixtures at the Gillette Stadium in Foxborough, Massachusetts. The team, originally founded in 1959, plays in the AFC East division. The rivalry between the Patriots and the New York Jets…