The NHL Winter Classic ice hockey game has been held since 2008, and it’s a staple of the outdoor calendar for the National Hockey League (NHL). In 2020, it takes place on New Year’s Day at Dallas’s Cotton Bowl, where the Nashville Predators will go into battle with the Dallas Stars.

What is the NHL Winter Classic?

This event is one of three series of regular outdoor games run by the NHL, the other two being the NHL Heritage Classic and the NHL Stadium Series.

It takes place on or around New Year’s Day each year, typically in a baseball or football stadium in a city with a local NHL side.

Promoted as a return to ice hockey’s outdoor roots, and designed to recreate pond hockey, the Winter Classic has become a premier NHL event, and it’s hugely popular, with sky-high attendance and TV ratings.

Based in New York since 1989, the NHL is widely viewed as one of the world’s premier professional ice hockey leagues, and one of North America’s most important sports leagues.

It was established in November 1917 in Montreal as a successor to the National Hockey Association, founded eight years earlier.

There are two leagues or conferences within the NHL, the Eastern and Western ones. The regular season runs from early October until mid-April, at the end of which 16-team playoffs lead to the prestigious Stanley Cup being awarded.

What are the basic rules of ice hockey?

The rules of the game are refreshingly simple. Every game is made up of three 20-minute sections, with a pause between each one. Each period starts with a ‘face-off’ as two competing players vie to seize possession of the puck that the referee drops into the rink’s centre circle.

If the score is tied at the end, there is overtime. In the regular season, this is a five-minute sudden-death affair in which the first side to score wins. A penalty shoot-out will decide things if overtime doesn’t – there are no draws in this sport.

Finally, ice hockey is played by two teams of six including the goalkeeper.

If an attacking player enters the opposing side’s defence area (as demarcated by a blue line) before the puck, they are called offside. Play is stopped and another face-off must take place in the ‘neutral’ zone.

This is where a player hits the puck from their own half of the rink past the other side’s goal line without it deflecting or coming in contact with another player. Should this happen, play is again stopped, and the puck returned to the pass’s starting point with no goal awarded.

Betting on the NHL Winter Classic

The NHL Winter Classic is a great way of beating the early January blues and is something to look forward to after the Christmas festivities. Have a flutter via one of our trusted listed bookmakers to make the whole thing even more exciting and enjoyable. And it’s certainly something different to try in the UK, where there’s no particularly strong tradition of ice hockey, despite the sport becoming increasingly popular. Bet on the NHL Winter Classic now at Roger.com. 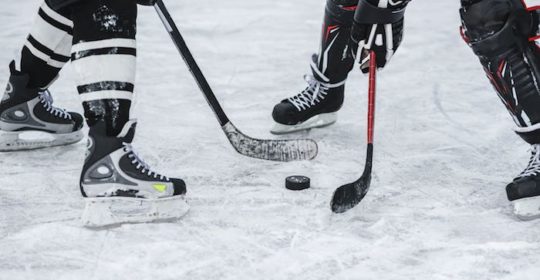