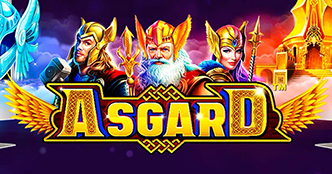 Real Time Gaming’s action-packed Asgard, powered by software from Pragmatic Play, is presented over five reels and three rows, with up to 243 ways of winning, and is inspired by mythology.

There’s a cartoon-style feels to the appearance of this 2016 release, as you enter the realm of Norse gods, complete with snowy mountain peaks, waterfalls and skies split apart by lightning. The gods rule the place in the sky where the game takes place, Asgard.

And, as you’d expect, there’s a suitably dramatic soundtrack to accompany your playing.

Symbols on the reels include the generic lower-paying playing-card values, alongside the four gods Odin, Freyja, Loki and Thor. Of these, Odin is the most rewarding, forking out a tidy 10x stake for five on a single Payline.

Set up Autoplay to get the reels to turn for up to a thousand spins without interruption.

The Asgard icon serves as your Wild here. As is typical, it substitutes for all other symbols save the bonus one, while shelling out at up to 20x overall wager. The Scatter is a blue symbol with silver ornaments and simply labelled Bonus.

On any main-game whirl, you could land one of four bonus perks at random, all connected to the four Norse gods mentioned above.

Land the bonus icon on the middle three reels off a single spin to activate this. You’ll then be allocated one of a quartet of free spins rounds, and be able to enjoy five free whirls in all cases.

Again, each of the free spins is associated with one of the Norse gods and involves different extras, such as additional Wilds.

There’s a top (non-progressive) jackpot in Asgard of 6,000 coins.

RTP or Return to Player in Asgard is a perfectly decent 96.48%. And you should find the perks kick in pretty regularly. The variance here errs on the higher side of medium, meaning you’ll want to keep an eye on your bankroll, yet you should find base-game wins nicely balanced with the bonus modes.

Make no mistake, Pragmatic Play has created a fine-looking, well-crafted slot in Asgard. And while Norse slots have definitely been done frequently before, indeed the theme has become increasingly popular in recent years, we reckon this offering is one of the better ones.

So give it a go, and see if it’s a game that works for you.

Where can I play Asgard online?

Who developed the game Asgard?

Asgard has been developed by the software provider Real Time Gaming

What type of game is Asgard?

Asgard is categorised as Slots

What devices can I play Asgard on?

Asgard can be played on iOS, Android, Desktop, Mobile