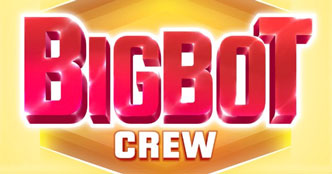 Venture into a parallel universe where you can help build the robots of the future! Bigbot Crew is a highly volatile game (we know the title sounds like an ‘80s rap group) that’s powered thanks to the ever-reliable Quickspin and played over five reels and 40 fixed Paylines with four rows.

The reels spin on a pavement as part of a somewhat shabby street scene in a sprawling, exotic city in a nameless country. With some great bonus features, this absorbing slot is the most action-packed offering yet from respected developer Quickspin, and there’s the chance to win more than 5,200 times your bet on every free spin.

There’s a story (of sorts) in Bigbot Crew – so it’s great if you like a bit of narrative with your gaming. Join a desperate trio of technically-minded teenagers as they work to build tomorrow’s robots. The teens are Joaquin, Danielle and Matsuo, and their efforts have some pretty high-impact graphics as a backdrop.

The technically-minded gang is represented by the higher-value symbols, and two drone-like icons are also high value. Meanwhile, the four cogs in various colours depict the lower-paying symbols. The most lucrative symbol is Matsuo, who gives you 7.5 times your stake for five of a kind across a Payline.

The kids’ finest creation is the Bigbot, a multi-function humanoid with the power to help you unlock some big prizes.

Pay from 40p a spin to £100 on your desktop or across all kinds of mobile devices and tablets.

The Bigbot robot is the Wild and appears on Reels Two, Three and Four during the base game, in which he replaces the others to help create winning combinations, apart from the scatter symbol. He’s four positions tall, and you can nudge him so that every position on a specific reel is covered.

Land five of them on a Payline to grab 10 times your initial stake. But the Bigbot appears only on the three middle games during the base games, and on all reels for two bonus features.

Land two or more of the Bigbot Wilds to launch this when all positions over two reels are completely covered. The respins you get will be the same as the number of Bigbots on screen. Any fresh ones landing generate a further respin, and all Wilds are displayed in new positions for each spin.

With this feature, you can get more than 5,200 times your stake.

Launch this when you land a minimum of three of the blue scatter symbols wherever you can see them to get eight free spins initially. Bigbots are displayed on all reels during this round, and any landing to cover all positions bag you an additional spin. Those landing only partially in view nudge so all positions are covered, but there’s no extra spin.

The Return to Player or RTP with BIGBOT Crew is a far-from-shabby 96.51%.

The Bottom Line on Bigbot Crew

Rest assured that Bigbot Crew is one of those games that’s simpler than it sounds! And there’s no denying the quality of this slot, or the inventiveness of the bonus features – which seem to be launched pretty regularly.

Where can I play Bigbot Crew online?

Who developed the game Bigbot Crew?

Bigbot Crew has been developed by the software provider Red Tiger

What type of game is Bigbot Crew?

Bigbot Crew is categorised as Slots

What devices can I play Bigbot Crew on?

Bigbot Crew can be played on iOS, Android, Desktop, Mobile