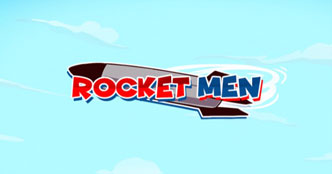 Nuclear Armageddon and political satire may not seem the likeliest of themes for a slot game, but there’s a real slapstick, cartoonish feel to this one. Rocket Men, from Isle of Man-based Red Tiger Gaming, is a five-reel, three-row affair with 20 Paylines.

It’s also one of the most topical, tongue-in-cheek slots you’re likely to find anywhere, taking as its theme the efforts of North Korean leader Kim Jong-un and US President Donald Trump as they insult each other petulantly, while simultaneously threatening one another with complete annihilation.

The reels spin between a North Korean guard tower and an American aircraft carrier as the odd missile whizzes across the top of your screen.

The animation also includes Air Force One, Trump Tower and a statue of the president fashioned in the style of the Statue of Liberty. Meanwhile, his North Korean counterpart has nuclear weapons at the ready on top of his palace, shown to the right. Expect bold colours and a background made of several shades of blue.

The key with Rocket Men Slot is to match at least three symbols left to right across the 20 fixed Paylines. And you can play from just 20p, or for up to £500 a spin.

Among the higher-paying symbols are a hamburger packed with explosives, a blue rubber duck and a not-especially politically correct female backside. The lower-value symbols include the number 10 and the letters Jack, Queen, King and Ace.

Some have expressed disappointment that five of the 11 symbols featuring on the pay table are bog-standard playing-card symbols, but never mind.

A red or blue missile is the Wild, and this replaces all others to help form winning combinations, except for the special Donald and Kim symbols. Landing it earns you up to 500 coins per Payline. And, if you’re lucky, you’ll unlock five special bonus features potentially allowing you to win big.

Land Trump and Kim on reels one and five respectively to launch this feature. Weapons are launched and battle lasts until there is a draw or a win:

This lets you choose rockets for Kim to launch. Continue until the rounds ends, or a rocket crashes into the sea.

Choose some bikini-clad girls (we warned you this game wasn’t that politically correct) and reveal prizes.

Win limitless spins, during which both leaders activate Wilds across the reels. If the Wilds get to the other leader’s side, their health worsens and the round finishes.

Land the Donald anywhere on Reel One to trigger this. The character then hits golf balls on to the reels, which should knock away the symbols that are there to make space for new ones.

Land the North Korean leader on Reel Five to launch this one. Rockets are activated at the reels, which can be converted into Wilds wherever they land.

With Rocket Men Slot, the Return to Player or RTP is a perfectly acceptable 95.24%.

Given the current nature of the theme, the lifespan of this one is necessarily quite limited. But with its amusing animations and stacks of bonus features, Rocket Men Slot is nothing if not entertaining – one reviewer described it as ‘ridiculously fun’. And, you can enjoy it no matter what you may think of the two leaders in real life.

Where can I play Rocket Men Slot online?

What type of game is Rocket Men Slot?

What devices can I play Rocket Men Slot on?