Wildparkstadion – so-called because it is sited on a former deer park – is a football arena in Karlsruhe, near Germany’s eastern border with France and serves as the home ground for the Karlsruher SC football team.

Football has been played at this venue since 1922, with the modern stadium having been constructed in 1955, since when there have been a number of renovations and updates.

In 2006 it was agreed that there would be a complete rebuilding of the entire stadium but a financial dispute began between Karlsruher SC and the city which led to the eventual abandonment of the plan eight years later. However, the improvement program was recently revived and the construction process began in November 2018, with most of the finances funded by the city.

Work was carried out in stages to allow for games to continue to take place in front of crowds of at least 15,000 fans. The plan is for the complete rebuild, including installation of a significant set of solar panels on the canopy, to be completed in the first half of 2022, although the COVID-19 pandemic has caused a few delays.

Karlsruher SC is a football team that has played its home games at the Wildparkstadion since 1955 when the stadium first opened. The team is currently plying its trade in the second tier of German football.

In its very early years, Karlsruher SC had the honour of being crowned German champion in 1909, as well as winning back-to-back DFB-Pokal titles in 1955 and 1956. The club captured its last big trophy back in 1996 when it won the Intertoto Cup, a European competition.

The club itself was founded in 1894 and there have been a number of mergers with other clubs over the years. It had the distinction of being one of the founding members of the Bundesliga in 1963 and for the majority of time has found itself going up and down between the top two tiers.

The club’s best finish in the top tier was a 6th place in 1996. Since then, most of the club’s seasons have either been in the second or third tiers of football in Germany. The club’s main rival is VfB Stuttgart, and it is a hotly contested local battle whenever they meet.

Some of the other notable achievements for the club over the years include winning the second-tier league twice, as well as twice finishing runner-up in the DFB-Pokal, most recently in 1996. The team is known for a squad consisting mostly of home-grown players.

Betting on Games at the Wildparkstadion

Over the years, there have been many great games at the Wildparkstadion. Karlsruher SC previously was a great force in German football and it is looking to get back to these heights once more. Its new stadium will be a great boost for the home team and supporters alike.

For all Karlsruher SC games, you will have access to a good variety of betting markets with the leading sportsbooks. To check out expert reviews of the best platforms, you can head on over to Roger.com. Each platform is reviewed in an unbiased manner, giving you an idea as to what will be the ideal fit for your needs. 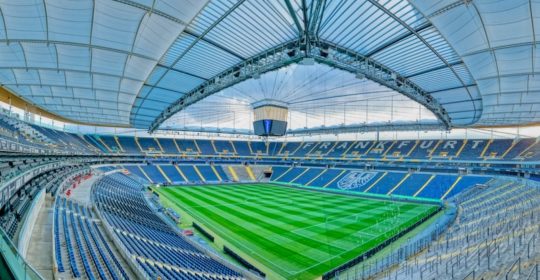