Deutsche Bank Park sits just 4½ miles from the centre of Frankfurt. It is the home of German football side Eintracht, the Waldstadion.

Due to sponsorship, this venue has been known as the Commerzbank Arena and now Deutsche Bank Park, but despite the new names has been a fixture on the German football circuit since way back in 1925 when it was constructed.

A Short History of the Waldstadion

The original Waldstadion was opened in time for the 1925 Workers’ Summer Olympiad in the area, with 40,000 being packed in for the football final in which Germany played Finland. Capacity later increased to 55,000.

After a few successful decades, the owners didn’t rest on their laurels and upgraded in 1953, this coming after a crowd of 70,000 squeezed into the ground for a game against Nurnberg with obvious modernisations being needed.

A proper reconstruction was undertaken here between 1972 and 1974 in time for the Waldstadion to host games at the 1974 World Cup in Germany, which it did successfully, while now the ground is a fully modern bowl created a great atmosphere for Eintracht Frankfurt home matches.

Under its various guises since 1925, what is now Deutsche Bank Park has seen its fair share of great action. These four games are among the most important and/or most entertaining the venue has ever hosted down the years.

The Waldstadion packed in 72,000 people for the semi-final first leg of the 1960 European Cup as Scottish giants Rangers came to town.

1-1 at half-time, the tie appeared to be a tight one. However, Dieter Stinka’s goal was added to by Alfred Pfaff (2), Dieter Lindner (2) and Erwin Stein in the space of half an hour as the home side ran riot to win 6-1. They even took the second leg 6-3 at Ibrox to reach the final at Hampden Park.

Two of Europe’s most entertaining teams met there, with Real Madrid eventually coming out on top 7-3.

One of the greatest nights in the history of this stadium, or that of Eintracht Frankfurt, came in May 1980 when the club lifted the UEFA Cup for the first and only time.

A dream run for the German teams had seen the semi-finals become an all-German affair, Frankfurt easily defeating Bayern Munich to reach this stage.

They lost an entertaining first final leg 3-2 at Monchengladbach, however, on this evening a tense but professional display was rewarded when Fred Schaub scored the only goal of the game to ensure Eintracht won the game and the final itself on the away goals rule.

Playing in 2.Bundesliga, Eintracht Frankfurt were looking for a way back to the top during the 1997-98 season. On game week 23, having just hit top spot the week before, the club played closest challengers Freiburg here in a game that would go a long way to deciding the second-tier title.

In a dominant display, the home side asserted early on and scored in the third minute through Thomas Sobotzick. That goal was added to in the second half by Thomas Zampach with this victory being a real signal of intent; the club from this point only relinquished top spot for two weeks on their way to winning the title.

During their ultimately successful DFB-Pokal campaign in the 2017-18 season, Eintracht Frankfurt only got to play once at this stadium. They took full advantage of that fact for sure, dispatching Mainz 3-0 with an excellent performance as goals from Ante Rebic, Omar Mascarell and an own goal from Alexander Hack sealed the club’s place in the semi-finals.

A narrow win at Schalke in the semis and a famous 3-1 win over Bayern Munich in Berlin meant the club were cup winners for the first time in 20 years.

Bet on Matches at Deutsche Bank Park Now via Roger.com

You can wager on all games at Deutsche Bank Park with Roger.com. Get on via one of our highly recommended online bookmakers to bet quickly, safely and securely.

Germany’s football pyramid is a large one but the at the very tip of it is the German Bundesliga, the pinnacle of professional football in the country. Unlike in other major European leagues, the German Bundesliga is made up of only 18 teams rather than the usual 20, something that helps to keep the quality… 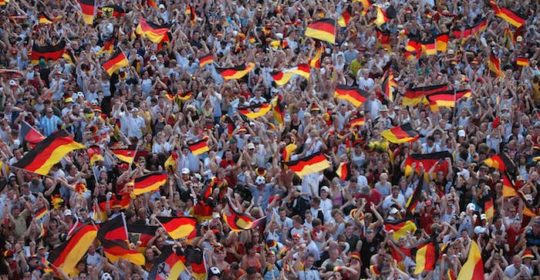