Kelso Racecourse is dedicated to thoroughbred horse racing and is located in Scotland. It is a small track, but it has won numerous awards of the years for with the experience it provides to race attenders and the decent standard of racing that takes place there. Racing has been taking place in the area since the 18th century and there are now two different tracks that host racing at Kelso Racecourse.

The first-ever race that is on the written records of having taken place at Kelso Racecourse was in 1734. Racing took place at a few different locations in the region for a number of years. Owners of the current Kelso Racecourse chose and developed the site in 1822. They also built a grandstand at that time. This grandstand is still in place and the Historic Environment Scotland gave it protected status in 2011.

In its early years, it was called the Duke’s Course. One of the most notable moments of controversy in the history of Kelso Racecourse took place in May 1913. Four people were arrested after they attempted to set the track on fire. They were jailed and proceeded to start a hunger strike.

Only flat racing took place at Kelso Racecourse up until 1888. Ever since the venue has only hosted National Hunt racing.

There are two different tracks to be found at Kelso Racecourse. Both of them are left-handed and sharp. For the chase track, the total length is one mile and 600 yards, with the hurdle track being a mile and 330 yards in length. The run-in at the track famously has a very tough finish, with the run-in being all uphill for the final two furlongs.

Ticket prices for racing taking place at Kelso Racecourse are pretty affordable, especially if you are buying tickets in advance online rather than waiting for the day of racing itself and buying them at the gate. The prices will vary depending on:

But early bird tickets for a lot of days will start from as low as £10. There are also the likes of group discounts to consider.

There are a few different popular races that take place each year at Kelso Racecourse. The Morebattle Hurdle runs in February and takes place over hurdles at a distance of two miles and two furlongs. Horses that are at least four years old can partake in the race and there are ten hurdles in total. It has been running since 1984. The most notable winner was Jinxy Jack who won the race over four consecutive years from 1990 until 1993.

The Premier Kelso Hurdle takes place in March over hurdles and a distance of two miles and two furlongs. It is also open only to horses of at least four years old. This is a Grade II National Hunt race and there are ten hurdles that have to be jumped. It has run since 1990 and in 2003 it earned its Grade II status.

Racing takes place at Kelso Racecourse across the winter months, with the racing being of good quality despite the conditions often being testing. There can be gruelling conditions, but other than the heavy ground at times, stamina is still a major factor in the race despite the sharp turns. The chase course does have high casualty rates, which is something to be noted. The hurdles track has long gaps between the jumps, but it is just as challenging as the other track.

With the racing at Kelso Racecourse, there are always some interesting participants despite it being such a small course. This allows you to potentially spot some value, as a lot of bookmakers will focus their attention on racing at a lot of the bigger tracks across the country.

Our team of unbiased experts has reviewed each of these sites. This takes a lot of the tedious work out of your hands and you can focus on choosing which horses you wish to back at Kelso Racecourse racing. 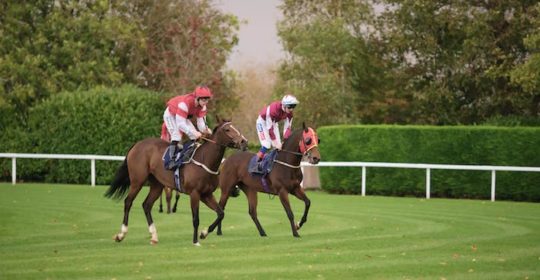 Known also as Royal Windsor Racecourse this track is very much in a regal heartland. It’s located only one-and-a-half miles from Windsor Castle and just seven miles from Ascot Racecourse. Windsor Racecourse sits right on the banks of the River Thames, leading to some people even choosing to arrive by boat! Windsor, of course, is…