Haydock Park Racecourse is a track in Merseyside in the North of England. It is in a parkland area surrounded by a number of different towns. There has been racing taking place in the region since the 18th century.

Haydock Park Racecourse itself was first opened in 1899 and it has been almost constantly ever since. It is under the ownership of the Jockey Club, which also owns many more notable tracks across Great Britain.

Haydock Park Racecourse venue is located almost exactly between Manchester and Liverpool. It is also easy to access from a lot of the major hubs in the region. The track initially opened in 1899, but racing has been taking place in the area since the early days of the 18th century.

One of the main hubs for racing was at Newton, which was also called Golborne Heath. These races were popular and drew people from all types of backgrounds. Haydock Park Racecourse is one of the most used tracks in the region, with an average of 32 race days taking place each year.

There are many leading horses that have raced at the track over the years and the Old Newton Cup keeps the link that exists between the original course and the modern Haydock Park Racecourse.

The flats racing track at Haydock Park Racecourse is:

In total, it is a mile and five furlongs in length, with the run-in being slightly uphill. There can also be six furlongs added to the straight to allow for sprints on a straight track at Haydock Park Racecourse. There is also a jumps racing track at the venue.

Both National Hunt and flat racing take place at the venue each year. On two occasions, Haydock Park Racecourse won the award of Racecourse of the Year, receiving this honour in 1998 and 2000. There are four different grandstands at the track, as well as great facilities for hosting events.

There is an abundance of racing that takes place each year at Haydock Park Racecourse. Therefore, you have plenty of opportunities to attend racing at the venue. Ticket prices will be cheaper online, with general admission options usually starting from about £10 for less popular meetings.

There are many leading races that take place at Haydock Park Racecourse each year. Some of these include the Grand National Trial that takes place in February, the Temple Stakes in May, Lancashire Oaks and the Old Newton Cup in July, the Sprint Cup in September and November sees the Betfair Chase taking place.

The Betfair Chase is the first leg for the National Hunt Triple Crown, with a £1 million bonus being up for grabs. The legendary Kauto Star was victorious in this race on four different occasions.

For longer races, the advantage is generally in staying close to the far rail when it comes to the flat course. The ground is usually more testing on the side of the stands. For sprints races, the centre of the track is usually used, which allows for a better running as the ground is always a lot better in this area.

When it comes to jumps course, horses that have stamina will get a lot of attention. This is particularly true for races that are taking place in the depths of winter. For meetings in the spring and summer, there will be more of a focus on speed. The jumps were previously seen to be very tough at the track. However, they have become a bit easier in recent years due to newer types of portable fences. So keep this in mind when betting at Haydock Park.

There are both jumps and flats racing at Haydock Park Racecourse each year. Therefore, there is a lot of racing to consider. It is usually one of the busiest tracks each season in the entire country. So, you are going to have plenty of betting opportunities to take advantage of.

At Roger.com, you can easily and quickly see which operators are best-suited to offering markets on races at Haydock Park Racecourse. You may be looking to live stream the races on these sites or find the best odds. Whatever the case may be, Roger.com will have you covered with its objective and unbiased reviews. 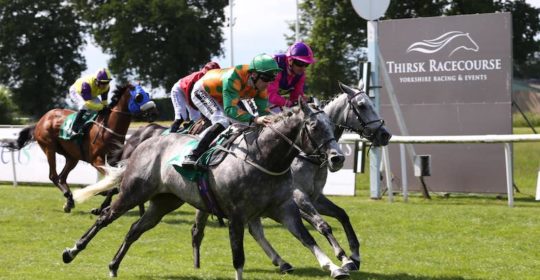 Thirsk Racecourse is a thoroughbred horse racing venue in the Thirsk region of North Yorkshire, England. The racecourse has a very interesting history. For instance, racing at the venue dates back centuries and the racecourse underwent numerous closures during World War I and II. It is still a popular venue for horse racing today, with…